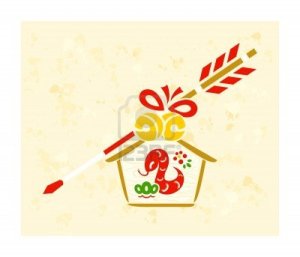 There are many shrines that have archery rites, and it is common for some shrine visitors during their New Year visit to buy their decorative arrow charms, made of wood and with a wooden tip, and which are known as “hamaya” which literally means, “demon-breaking/banishing arrow” and they perform the role of misfortune dispelling arrows or as good luck charms to attract good luck.  These are sold at shrines at New Year’s to ward off misfortune and to attract good luck. The hamaya, will be kept for a year, and the old arrow will be burned in the Dondo Yaki Festival held on Jan. 15th in a “cleansing fire” to show gratitude for the past year and bring happiness for the year to come.

From the Edo to the early Meiji period, hamaya were given as gifts to celebrate the first New Year of a male baby’s life, frequently in a set together with a pair of decorative bow called hamayumi (“demon-breaking bows”) and arrow. The custom of selling the arrow alone is thought to be a later abbreviation of this custom. See “Demon-breaking arrow, hamaya” http://muza-chan.net/japan/index.php/blog/demon-breaking-arrow-hamaya

According to the Encyclopedia of Shinto:

“…the custom persists of standing such symbolic bows and arrows at the northeast and southwest corners of a new house (called kimon, the directions thought particularly susceptible to evil influences) on the occasion of the roof-raising ceremonies (jōtōsai). The etymological significance of hama is not clear, but it is said to have been an ancient word for an archery target or an archery contest. The practice of making round targets of braided bamboo or straw, or circles of wood, and throwing them into the air or rolling them on the ground as archery targets was a common children’s pastime, but it was also known as a form of New Year’s divination used to foretell the fortunes of the coming year (toshiura).”

The arrow custom likely hails from the Steppes where Hun-Mongolic, Northeastern Eurasian customs very similar to the Japanese hamayayumi gift for baby boys and divining by arrows, have also been handed down through archer generations since antiquity, see “Ancient Turkic Deities”:

“Part of the Altai Türks, on the child reaching the age of six months, invited a Kam for a special sacramentation to Umai-ana (ana – mother), with a sacrifice of a young bull. During sacramentation they asked Umai to safeguard and to look after the baby, and attached to the cradle as a talisman a small model of a bow with an arrow, symbolizing the weapon Umai used for malicious spirits trying to attack the child. The complete care and the constant presence of Umai near the child continued until he learned not only to walk freely, and run, but mostly until he understood speech well, and spoke fluently. It happened at approximately 5-6 years of age. Now the child was completely included into his social environment, first of all in the circle of the parents and relatives, was being accustomed to work, played with children of his age, etc. At this point his connection with Umai-ana completely stopped.’6 When a child reached this age, a special kamlation (sacramentation. – Translator’s note) to Tengri was organized at the request of the parents, with a sacrifice of a domestic animal, and with an appeal for longevity for the child, because Tengri endowed the Kut (soul) to the child.”

A closely related tradition to the hamaya custom, is the yakudoshi good luck-bad luck arrow which is similar to the art of belomancy or divination by arrow practiced by the ancients.

Belomancy, also bolomancy, is the ancient art of divination by use of arrows. Belomancy was practised also by the Babylonians, Greeks, Arabs and Scythians.

The feathered arrows were typically marked with occult symbols. By one method, different possible answers to a given question were written and tied to each arrow. For example, three arrows would be marked with the phrases, ‘God orders it me’, ‘God forbids it me’, and the third would be blank. The arrow that flew the furthest indicated the answer. Another method involves the same thing, but without shooting the arrows. They would simply be shuffled in the quiver, worn preferably on the back, and the first arrow to be drawn indicated the answer. If a blank arrow was drawn, they would redraw.

This was an ancient practice, and probably that mentioned in the Book of Ezekiel 21:21, shown below in the original Hebrew, and translated to English in the New American Standard Bible,

כִּי-עָמַד מֶלֶךְ-בָּבֶל אֶל-אֵם הַדֶּרֶךְ, בְּרֹאשׁ שְׁנֵי הַדְּרָכִים–לִקְסָם-קָסֶם: קִלְקַל בַּחִצִּים שָׁאַל בַּתְּרָפִים, רָאָה בַּכָּבֵד.
“For the king of Babylon stands at the parting of the way, at the head of the two ways, to use divination; he shakes the arrows, he consults the household idols, he looks at the liver.”
St. Jerome agrees with this understanding of the verse, and observes that the practice was frequent among the Assyrians and Babylonians. Something like it is also mentioned in Hosea 4:12, although a staff or rod is used instead of arrows, which is rather rhabdomancy than belomancy. Grotius, as well as Jerome, confounds the two together, and shows that it prevailed much among the Magi, Chaldean, and Scythians, from which it passed to the Slavonians, and then to the Germans, whom Tacitus observes to make use of it.

A lost traveller might also use belomancy to find his way, by tossing the arrow into the air, and letting its angle show him the way.

The article below refers to the concept of Yakudoshi which is a custom that according to Lára Ósk Hafbergsdóttir’s “Contemporary popular beliefs in Japan” seems to be “originally derived from China, altering in Japan and intermingling with older, non-Chinese practices and beliefs.” Also, ideas about which “differing days associated with luck, with some being lucky and other being bad for new ventures”, most of these are associated with astrological lore and to the old Chinese lunar-solar calendar that was adopted in Japan in the seventh century AD.

Yakudoshi is a Japanese folk custom that warns that a person is more likely to experience misfortune or illness at specific ages. To avoid bad things from happening, it is believed one should live modestly during those years.

Yakudoshi is nothing new–it’s a belief that has been passed down for ages. But recently, more people are starting to reconsider their lifestyle by taking better care of their health and making friends of a similar age in their communities.

Generally, men are believed to go through two periods of yakudoshi at ages 25 and 42, while women experience yakudoshi at 19 and 33. Under the yakudoshi concept, a person is 1 year old at birth since the period between conception and birth is considered the first year of life. Year 2 begins at the start of following year.

There are various stories why yakudoshi is set at those ages. Some say it comes from the 12-year cycle of the Chinese “eto” astrological calendar, while other say it’s a play on words. For example, in Japanese, “19” is read as “juku,” which can also be written using kanji meaning “multiple suffering,” while “33” can be read as “san-zan,” meaning “hideous.”

Yakudoshi ages are also calculated differently depending on the shrine or temple.

The Fukuoka-based private research institute Anti-Aging Laboratory, which was established by a health food company, conducted a survey in August on 2,000 people aged between 30 and 69.

According to the survey, 32 percent of respondents “care about yakudoshi,” and 36 percent said they had gone to temple or shrine to receive “yakuyoke” or “yakubarai” blessings to ward off misfortune.

More than 40 percent said they believed they were more likely to become sick during yakudoshi years.

The Anti-Aging Laboratory then studied the relationship between aging and illness to propose a set of “new yakudoshi” to promote health awareness.

With support from the Tokyo-based Japan Medical Data Center, the lab analyzed the medical bills of about 1 million people to measure the frequency of seven health conditions, such as cerebrovascular disease, dementia and cancer, at particular ages.

“We hope the new yakudoshi will become a good opportunity for people to review their lifestyles so they can live longer lives,” said Anti-Aging director and arteriosclerosis expert Hiroshige Itakura.

Young people in particular also seem to be interested in yakudoshi.

Iwashimizu Hachimangu in Yawata, Kyoto Prefecture, a shrine known for specializing in yakuyoke, has seen an increase in the number of young people visiting for that purpose.

“They seem to think of this shrine as a ‘power spot.’ I’m often asked to explain about yakuyoke,” said Norito Sakurai, a spokesperson for the shrine.

Meanwhile, many women in their 30s have taken to visiting Nishiarai Daishi in Adachi Ward, Tokyo. According to the temple, 37 is also an unlucky age for women and as a result, many women who have turned or will turn 37 visit there.

Young people in their 20s and 30s are also often spotted at Sano Yakuyoke Daishi in Sano, Tochigi Prefecture.

“Yakudoshi has another meaning of ‘yaku o morau’ [getting a role]. It’s considered to have a positive vibe as a turning point in a person’s life,” said essayist Hiromi Tanaka, an author of a book on yakudoshi.

“The number of women who visit shrines or temples for fun has increased over the last couple of years, and I think they are showing some interest in experiencing this old custom in the same way foreigners are interested in seeing Japan,” she added.

A reason to get together

Some groups use yakudoshi as a way to get people to interact with others in their community.

“Participants of the same generation wine and dine together [after the ritual] and get to know each other while learning about a traditional Japanese custom,” said an NPO staff member.

At Goyu Shrine in Toyokawa, Aichi Prefecture, men get together to form a “Yakudoshi-kai” group for organizing a summer festival.

The main purpose of the festival is yakubarai, but Yasuyuki Fukui, 40, one of the group’s members, said, “The festival will help strengthen the sense of unity among those of the same generation, while preserving our region’s traditions.”

Kokugakuin University Prof. Takanori Shintani, a folklore expert, said: “Japanese have long felt secure by casually practicing yakubarai. In times when people feel the future seems uncertain, they seek security and review their lives–yakudoshi could be an indicator of that.”