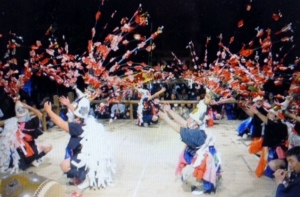 The Sarudengaku dance, part of the Fujimori no Ta-asobi festival in Yaizu, Shizuoka Prefecture. (Atsuo Negishi)

Many shrines in Japan still hold a dance drama called Ta asobi 田遊，or “ Rice field play,” on the fifteenth day of the first lunar month.
This is a dance which mimes the yearly processes involved in the production of rice. They often feature a man in a woman’s costume and mask who mimes the birth of a child. After this it is fairly common for another woman to appear carrying a baby on her back. This baby is often represented as a phallic-shaped doll, as a big ladle, or as rice
seeds in a sack or basket. The baby is called yonabo 米穂，or “ Rice ears.” It is clear that the festival depicts the birth of the rice baby….” (For parallels, see Frazer who wrote on the Malay and Dayak customs the Rice-Mother and the soul of the Rice (baby); see also Bengali paddy fertility rituals)

[These early rice festivals were so important that a version of these were later incorporated into royal court rituals.]

“The name “ Hononinigi ” means “ abundant rice ears•” Hononinigi seems to have originally been a rice spirit. According to a fragment of the Hyuga fudoki, when he descended to Futagami Peak in the Takachiho
district in Hyuga, he found that the earth was very dark both night and day. Following the advice of two local residents, Okuwa and Wokuwa, he strewed unhulled rice in all directions, which caused the sky to clear and light to appear.6 Stories such as this make it evident that Hononinigi was associated with rice rituals, although he was also
considered the child of the sun.
Prince Hononinigi’s father was Prince Oshihomimi, whose name means “ Big Rice Ears.” He too was a rice spirit. According to one version of the story found in Nihon shoki Amaterasu bestowed on him the ears of the sacred rice fields (Aston 1972: 83) This story represents the concept that the harvest festival originated in the world of the heavens.
It was brought to earth when the young Prince Oshihomimi brought the rice ears.
In one Nihon shoki account, Hononinigi descends in the form of a baby wrapped in a coverlet, coverlets such as that were used for the seclusion ritual in ancient Japan. On the occasion of the Daijo-sai 大嘗祭，7 the Niiname-sai 新嘗祭，8 and Jinkon-jiki 神今食9 in the Imperial court, a coverlet was spread on piled mats in the middle of the ceremonial hall. This coverlet was called an ofusuma 覆衾，and was believed to be the seat of the deity (Holtom 1972: 96-97; Ellwood 1973: 69-71; Matsumae 1970: 221-233).”1 The medieval record Koshidai-sho suggests
that this coverlet was used by the Emperor himself (Kawade 1953: 84—89). Orikuchi Shinobu has speculated that this covering was used to represent the rebirth or resurrection of the Emperor (Orikuchi 1955: 195-196). The common people as well as the Emperor used such a coverlet during the ancient Ninname-sai.

As to Sarutabiko’s role (who appears in the dance above):

“When Prince Hononinigi was about to descend, he found a god standing at the Heavenly crossroads. This god’s face and buttocks shone brightly, his nose was long, and his mirror-like eyeballs had a glow like that of a ground cherry. All of the subordinate deities were afraid of him. Then Prince Hononinigi commanded the goddess Ame
no Uzume to confront him and make inquiries. This goddess exposed her breasts and genitals and confronted him with a smile, much as she had done earlier in the Heavenly rock grotto myth. He answered her inquiry with the words, “ My name is Sarudabiko. I am waiting for the coming of the Heavenly Grandson.  The Prince commanded
Sarudabiko to guide the party, and they descended from heaven to the summit of Kushifuru Peak on Mt. Takachiho in Himuka (Kyushu; see Nihon shoki I: 148)”

… There is yet another piece of evidence that the story of Hononinigi was related to the Niiname Festival. According to one Nihon shoki version, Kamu Atakaashitsu Hime, the wife of Prince Hononinigi: by divination fixed upon a rice field to which she gave the name of Sanada, and from the rice grown there brewed Heavenly sweet sake, with which
she entertained him. Moreover, with the rice from the Nunada rice field she made boiled rice and entertained him therewith (Aston 19 2: 86).
This description represents an ancient custom of the Niiname-sai. On that occasion a maiden or housewife made a sacred meal of rice and sake to entertain the deity.
In this tale Prince Hononinigi is regarded as the deity of fertility who was entertained by the woman in the Niiname-sai. In the Daijo sai, which is the most developed form of the Niiname-sai, a maiden called “ sake chila ’ was chosen by divination as the priestess, she made sacred sake from the first fruits of the rice and offered this to the deities.
This is a survival from the older forms of the Niiname-sai.” (Source: The Myth of the Descent of the Heavenly Grandson  Asian Folklore Studies’ Vol.42,1983, 159-179.)

” Most are dedicated to deities, as a form of prayer, or to re-enact important events in rural life, like rice planting….
No matter what dance is performed there is a feature common to all of them. Every dancer keeps a firm footing while stamping with the other foot – so that evil spirits are embedded in the ground.

An event that is even older is the Fujimori no Ta-asobi festival held in the rural Oigawa district of present day Yaizu, Shizuoka Prefecture, known for its rice paddies

Here, 27 dances are performed, each emulating movements involved in planting rice seedlings. The tradition is said to date back about 1,000 years.

One of the highlights is a dance called Madengaku performed by young men wearing head ornaments. They move in sequences, depicting the growth of rice plants. Another is the Sarudengaku dance in which men sway their flower adorned heads to imitate cherry blossoms and pray for a good harvest.

Praying for a plentiful harvest and a bountiful catch are not necessarily sedate affairs as anyone who has attended the Kenka Matsuri, or brawling festival, at the Amatsujinja shrine in Itoigawa, Niigata Prefecture, can attest.

Here, mikoshi, portable shrines are bumped into each other on purpose.

The men on each side wear happi coats of their own colors.

Some say the festival stems from fights over irrigating water to rice paddies. Others say the tradition stems from brawls over fishing grounds. No matter. It’s a lot of fun.

The Fujimori no Ta-asobi festival will be held on March 17 at the Oi-hachimangu shrine in Yaizu, Shizuoka Prefecture. The shrine can be reached by bus from JR Fujieda Station on the Tokaido Line.

The Kenka Matsuri will be held on April 10 at the Amatsujinja shrine in Itoigawa, Niigata Prefecture. The shrine is a 10 minute walk from JR Itoigawa Station, about 50 minutes from Toyama Station on the Hokuriku Line.”