Pre-Islamic Turkic mythology was dominated by shamanism. The chief deity was Tengri, a sky god, worshipped by the upper classes of early Turkic society until Manichaeism was introduced as the official religion of the Uyghur Empire in 763. The Wolf symbolizes honour and is also considered the mother of most Turkic peoples. Asena (Ashina Tuwu) is the wolf mother of Tumen Il-Qağan, the first Khan of the Göktürks. The Horse is also one of the main figures of Turkic mythology.
Name

The first known mention of the term Turk (Old Turkic: Türük[12][13] or Kök Türük[12][13] or Türük,[14] Chinese: 突厥, Pinyin: Tūjué, Wade-Giles: T’u-chüeh, Middle Chinese (Guangyun): [dʰuət-ki̯wɐt]) applied to a Turkic group was in reference to the Göktürks in the 6th century. A letter by Ishbara Qaghan to Emperor Wen of Sui in 585 described him as “the Great Turk Khan.” The Orhun inscriptions (735 CE) use the terms Turk and Turuk.

Previous use of similar terms are of unknown significance, although some strongly feel that they are evidence of the historical continuity of the term and the people as a linguistic unit since early times. This includes Chinese records Spring and Autumn Annals referring to a neighbouring people as Beidi.

There are references to certain groups in antiquity whose names could be the original form of “Türk/Türük” such as Togarma, Turukha, Turukku and so on. But the information gap is so substantial that we cannot firmly connect these ancient people to the modern Turks.

According to Turkologists Peter Golden and András Róna-Tas, the term Turk is ultimately rooted in the East Iranian Saka language:

“ “[Turk] is of East Iranian, most probably Saka, origin, and is the name of a ruling tribe whose leading clan Ashina conquered the Turks, reorganized them, but itself became rapidly Turkified”.

However, it is generally accepted that the term “Türk” is ultimately derived from the Old-Turkic migration-term “Türük” or “Törük”, which means “created”, “born”, or “strong”.

The Chinese Book of Zhou (7th century) presents an etymology of the name Turk as derived from “helmet”, explaining that taken this name refers to the shape of the Altai Mountains.[citation needed] According to Persian tradition, as reported by 11th-century ethnographer Mahmud of Kashgar and various other traditional Islamic scholars and historians, the name “Turk” stems from Tur, one of the sons of Japheth (see Turan). During the Middle Ages, the various Turkic peoples of the Eurasian steppe were also subsumed under the classical name of the Scythians.[25] Between 400 CE and the 16th century the Byzantine sources use the name Σκΰθαι in reference to twelve different Turkic peoples.[25]
In the modern Turkish language as used in the Republic of Turkey, a distinction is made between “Turks” and the “Turkic peoples” in loosely speaking: the term Türk corresponds specifically to the “Turkish-speaking” people (in this context, “Turkish-speaking” is considered the same as “Turkic-speaking”), while the term Türki refers generally to the people of modern “Turkic Republics” (Türki Cumhuriyetler or Türk Cumhuriyetleri). However, the proper usage of the term is based on the linguistic classification in order to avoid any political sense. In short, the term Türki can be used for Türk or vice versa.[26]

It is generally agreed that the first Turkic people lived in a region extending from Central Asia to Siberia with the majority of them living in China historically. Historically they were established after the 6th century BCE.[27] The earliest separate Turkic peoples appeared on the peripheries of the late Xiongnuconfederation (contemporaneous with the Chinese Han Dynasty).[28] Turkic people may be related to the Xiongnu,Dingling and Tiele people. According to the Book of Wei, the Tiele people were the remaining of the Chidi (赤狄), the red Di people competing with the Jin in the Spring and Autumn Period.[29]Turkic tribes, such as Khazars and Pechenegs, probably lived asnomads for many years before establishing the Göktürk Empireor Mongolia in the 6th century. These were herdsmen and nobles who were searching for new pastures and wealth. The first mention of Turks was in a Chinese text that mentioned trade of Turk tribes with the Sogdians along the Silk Road.[30] The first recorded use of “Turk” as a political name is a 6th-century reference to the word pronounced in Modern Chinese as Tujue. The Ashina clan migrated from Li-jien (modern Zhelai Zhai) to the Juan Juan seeking inclusion in their confederacy and protection from the prevalent dynasty. The tribe were famed metal smiths and was granted land near a mountain quarry which looked like a helmet, from which they were said to have gotten their name 突厥 (tūjué). A century later, their power had increased such that they conquered the Juan Juan and established the Gök Empire.[31]

Turkic peoples originally used their own alphabets, like Orkhon and Yenisey runiform, and later the Uyghur alphabet. The oldest inscription was found near the Issyk river in Kyrgyzstan. Traditional national and cultural symbols of the Turkic peoples include wolves in Turkic mythology and tradition; as well as the color blue, iron, and fire. Turquoiseblue, from the French word meaning “Turkish”, is the color of the stone turquoise still used as jewelry and a protection against evil eye.

It has often been suggested that the Xiongnu, mentioned in Han Dynasty records, were Proto-Turkic speakers.[32][33][34][35][36] Although little is known for certain about the Xiongnu language(s), it seems likely that at least some Xiongnu tribes spoke a Turkic language.[37] Some scholars see a possible connection with the Iranian-speaking Sakas,[38] while others believe they were probably a confederation of various ethnic and linguistic groups. On the other hand, genetics research from 2003[39] confirms the studies indicating that the Turkic people originated from the same area and so are related with the Xiongnu.[40]So the scientific genetic results show clearly that the Turks originated nearby the Centre-west part of modern China.

Xiongnu writing, older than Turkic is agreed to have the earliest known Turkic alphabet, the Orkhon script. This has been argued recently using the only extant possibly Xiongu writings, the rock art of the Yinshan and Helanshan.[41]It is dated from the 9th millennium BCE to 19th century, and consists mainly of engraved signs (petroglyphs) and few painted images.[42] Excavations done during 1924–1925, in Noin-Ula kurgans located in Selenga River in the northern Mongolian hills north of Ulan Bator, produced objects with over 20 carved characters, which were either identical or very similar to that of to the runic letters of the Turkic Orkhon script discovered in the Orkhon Valley.[43]

The Hun hordes of Attila, who invaded and conquered much of Europe in the 5th century, might have been Turkic and descendants of the Xiongnu.[28][44][45]Some scholars argue that the Huns were one of the earlier Turkic tribes, while others argue that they were of Mongolic origin.[46] Linguistics studies by Otto Maenchen-Helfen’s support a Turkic origin.[47][48] In all probability, they were closely related as the borders were not settled unlike modern times and migrations were common to distant places.

In the 6th century, 400 years after the collapse of northern Xiongnu power in Inner Asia, leadership of the Turkic peoples was taken over by the Göktürks.

Formerly in the Xiongnu nomadic confederation, the Göktürks inherited their traditions and administrative experience. From 552 to 745, Göktürk leadership united the nomadic Turkic tribes into the Göktürk Empire. This was the first known political entity to be called “Turk”. The name derives from gok, “blue” or “celestial”. Unlike its Xiongnu predecessor, the Göktürk Khanate had its temporary khans from the Ashina clan that were subordinate to a sovereign authority controlled by a council of tribal chiefs. The Khanate retained elements of its original shamanistic religion, Tengriism, although it received missionaries of Buddhist monks and practiced a syncretic religion. The Göktürks were the first Turkic people to write Old Turkic in a runic script, the Orkhon script. The Khanate was also the first state known as “Turk”. It eventually collapsed due to a series of dynastic conflicts, but the name “Turk” was later taken by many states and peoples.

Turkic peoples and related groups migrated west from Turkestan and what is now Mongolia towards Eastern Europe, Iranian plateau and Anatolia and modern Turkey in many waves.[49] The date of the initial expansion remains unknown. After many battles, they established their own state and later created theOttoman Empire.[50] The main migration occurred in medieval times, when they spread across most of Asia and into Europe and the Middle East.[31] They also participated in the Crusades.[51] 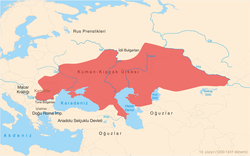 Kipchaks in Eurasia circa 1200.

Later Turkic peoples include the Avars, Karluks (mainly 8th century), Uyghurs, Kyrgyz, Oghuz (or Ğuz) Turks, and Turkmens. As these peoples were founding states in the area between Mongolia andTransoxiana, they came into contact with Muslims, and most gradually adopted Islam. Small groups of Turkic people practice other religions, including Christians, Jews (Khazars), Buddhists, and Zoroastrians.

In the 13th century, Mongols invaded Europe and established the Golden Horde in Eastern Europe, western & northern Central Asia, and even western Siberia. The Cuman-Kipchak Confederation and Islamic Volga Bulgaria were absorbed by the Golden Horde in the 13th century; in the 14th century, Islam became the official religion under Uzbeg Khan where the general population (Turks) as well as the aristocracy (Mongols) came to speak the Kipchak language and were collectively known as “Tatars” by Russians and Westerners. This country was also known as theKipchak Khanate and covered most of what is today Ukraine, as well as the entirety of modern-day southern and eastern Russia (the European section). The Golden Horde disintegrated into several khanates and hordes in the 15th and 16th century including the Crimean Khanate, Khanate of Kazan, and Kazakh Khanate (among others), which were one by one conquered and annexed by the Russian Empire in the 16th through 19th centuries.

In Siberia, the Siberian Khanate was established in the 1490s by fleeing Tatar aristocrats of the disintegrating Golden Horde who established Islam as the official religion in western Siberia over the partly Islamized native Siberian Tatars and indigenous Uralic peoples. It was the northern-most Islamic state in recorded history and it survived up until 1598 when it was conquered by Russia.