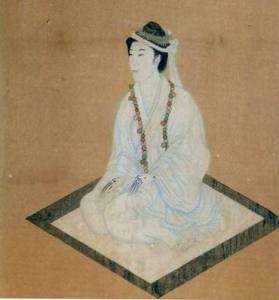 George H. Kerr in “Okinawa, the history of an island people” writes of an ancient cult that he calls a “living fossil” of a prehistoric age. Below is an extract from Kerr’s book offering important insights on the role of the noro, the female fire custodians of the Okinawan islands, the Tametomo legend and the Fire-bringing visitors.

From legendary times until the present day the noro priestess has exercised a powerful influence in the Ryukyuan community. until 1879 a daughter or sister of the king at Shuri usually assumed the role of the chief high priestess as intercessor between the spirit world and the king’s household, and was often an important counselor in royal affairs.
It was the noro’s duty to preserve the fire on the hearth. It can be imagined with what difficulty fire was transported from island to island in primitive days, and what hardships a community suffered if the precious flames were extinguished by accident. A daughter in each household was assigned the task of conserving and feeding the hearth” fire. Fire was a communal treasure, in itself a living thing, handed on from generation, to generation. A taboo system grew up around the office of the fire-custodian. She was expected to remain a virgin and was thought to be in close communication with the ancestors from whom fire descended. When new households were establishes, fire was transferred from the family home to the new dwelling or kindled anew with ceremony. In this way the continuity of the fire came to represent blood relationships and family continuity as well. The custodian of the fire upon the oldest hearth in the community assumed an official distinction; her office was hereditary, passing usually to a female child of the noro’s brother. A plot of land was set aside for he support. Thank offerings from the community enlarged her income. Within her house, three hearthstones served as a center of worship, for these formed the locus of the root deity (ne-gami) of the village.
It has been suggested that in ancient days fire was always made by striking stones together and that, through association the stones themselves became sacred. Another theory suggests that the three stones originally were used to support the earthenware pots over the fire and so became associated with it. It is noteworthy that the stones are brought from the seashore, no matter how far inland the house or village altar may be, and that among the pantomimic seasonal dances performed by Okinawan villagers, there usually is one which tells a legend of the “fire-bringing visitors.”
Vestments of white cloth (symbolizing ritual cleanliness) and a string of beads (including the magatama or curved jewels) have been symbols of the noro’s office since prehistoric times. Her duties require care of the hearth fire, worship of the ancestors through ritual devotion, and divination to settle upon auspicious days for marriage, burial, travel, or the simple tasks of the agricultural community.

While the noro has all but disappeared at Naha and Shuri, the institution still commands respect as diviner and intercessor for the common man in the country villages and in the outlying islands, where she guards the ritual objects on the sacred heath and attends springs and sacred groves associated with the welfare and protection of the village life.

Kerr is of the view that this noro institution is a relic matriarchal cult similar to those neolithic cults “once found in many regions of the Eurasian land-mass long before the literate and historic cultures of China, the Middle East, and the Mediterranean areas were evolved. The sacred groves, the springs and wells, the oracular shrines, and the guardian priestesses of British Isles find close counterpart in the 20th-century mysteries of the noro cult.”

Origin of the ancestral fire and ancestors

According to the Ryukyu Shinto-ki, (about 1603) at the beginning of time two deities named Shineri-kyu and a female named Amai-kyu. in due time, they built huts side by side. Although they indulged in no sexual intercourse, the female deity Amami-kyu became pregnant, thanks to the influence of a passing wind. Three children were born to her. The eldest, a son became the first ruler of the islands; the second, a girl became the first noro or priestess; and a third, a son, became the first of the common people. Fire, which was essential for their well-being, was obtained “from the Dragon Palace,” traditionally believed to rest on the bottom of the sea.
With this simple tale the Okinawans provide for the virgin birth of demigods who personify the essential social functions of administration, religious practice, and economic production. The Dragon Palace episode hints at a folk-memory that that at sometime in the dim past the fire treasured on every hearth was brought with religious care from somewhere over the open seas.
[the Okinawan scholar iha Fuyu, he devoted much time to an analysis of the early records, language and legend to discover the origins of Okinawan people and their prehistory. In the story of the two progenitores of the Okinawan people, he detected a fable embodying the meeting and blending if two peoples, possibly in the island of Amami oshima. The name of the female deity was Amami-kyu, which by a process of linguistic analysis, he identifies with a fishing people from kyushu who moved into Oshima and thence pushed on southward unto okinawa. The people of Oshima say they are descended from Amami-dake, who created Amami-Oshima. Some of the Omoro songs refer to the Amami-ya (“Dwelling of the Ama-bo” or fishers’ community)

According to the legendary history of one line of paramount local chieftains – singled out and styled a “royal house” called the Tenson dynasty, their first king called Shunten was descended from the gods who ruled for “seventeen thousand years.”

One version of the Tametomo legend says that Tametomo was sailing one day between  two Izu islands when he was blown far out to sea, drifting at last in the storm’s wake to Okinawa.

There he and his men were welcomed by a local chieftain, the Lord of Osato, with whose daughter he contracted a marriage. Shunten was born of that union. This was a temporary arrangement; he was to get back to the wars in Japan, and after a vain attempt to take his Okinawan wife and child with him, he and his men left Okinawa.

…we must note the existence in the Ryukyus of many stories of the sun goddess Amaterasu. One of these repeats the tradition into a great cave and of her return to bring light to the world after fearful darkness. In japan this legend is associated with a cave near the Ise Grand shrines in the Shima Peninsula; in Ryukyu it is associated with a deep hillside cavern overlooking the sea on the eastern shores of Iheya island. This legend of Ama no Iwa To may have been introduced from Japan in later years. The cave is still held sacred by the local priestesses, and the Okinawans have not lost pride in repeating local beliefs that the first Japanese emperor, Jimmu began his great north-eastward conquest of Japan from this minor island in the Ryukyus.