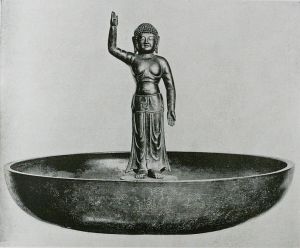 According to Buddhist tradition, Prince Siddhartha Gautama (Sakyamuni Buddha), the son of King Suddohana and Queen Maya, was born on 8 April 566 B.C. in the garden of Lumbini, in Nepal.

Temple visitors bring spring flowers as offerings to decorate a statue of the Buddha and symbolically pour sweet tea sweet tea, called ama-cha, made from hydrangea leafs over the statues, recreating the legend that at birth, Buddha was sprinkled with perfume by two Dragon Kings, ryuu. Another alternative version of the legend is that a gentle perfumed nectar rain fell from the sky bathing the baby Buddha. 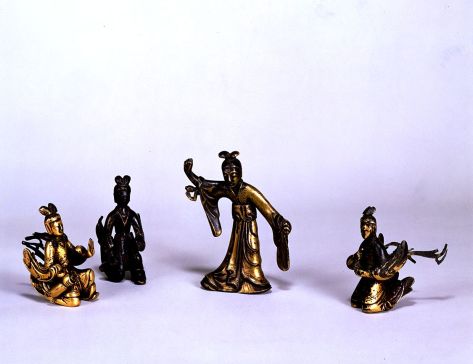 Bronze figures of Lady Maya and heavenly attendants (Tennin) (part of the Shijuhattai-butsu) first half of 7th century, Horyuji collection at the Tokyo  National Museum

This is ensemble of sculptural figurines depicts the scene of the birth of Shakyamuni (Japanese pronunciation: Shaka) from beneath the arm of his mother,  the Lady Maya. Such depictions are common in India and various parts of Asia since the earliest days of Buddhism, but they are rare in Japan. A version of the legend is recounted immediately below:

The Legend of Queen Maya and the birth of Buddha

“Twenty-five centuries ago, King Suddhodana ruled a land near the Himalaya Mountains.

One day during a midsummer festival, his wife Queen Maya retired to her quarters to rest, and she fell asleep and dreamed a vivid dream. Four angels carried her high into white mountain peaks and clothed her in flowers. A magnificent white bull elephant bearing a white lotus in its trunk approached Maya and walked around her three times. Then the elephant struck her on the right side with its trunk and vanished into her.

When the time for the birth grew near, Queen Maya wished to travel from Kapilavatthu, the King’s capital, to her childhood home, Devadaha, to give birth. With the King’s blessings she left Kapilavatthu on a palanquin carried by a thousand courtiers.

On the way to Devadaha, the procession passed Lumbini Grove, which was full of blossoming trees. Entranced, the Queen asked her courtiers to stop, and she left the palanquin and entered the grove. As she reached up to touch the blossoms, her son was born.

Then the Queen and her son were showered with perfumed blossoms, and two streams of sparkling water poured from the sky to bathe them. And the infant stood, and took seven steps, and proclaimed “I alone am the World-Honored One!”

Then Queen Maya and her son returned to Kapilavatthu. The Queen died seven days later, and the infant prince was nursed and raised by the Queen’s sister Pajapati, also married to King Suddhodana”

The ceremony of bathing the Buddha, called Kanbutsu-e (潅仏会 – The Bathing of Buddha), originated from China, but is first known to have been performed Asuka-dera in the year 606, in Nara.

On a flower decorated altar (hanamido), symbolizing the Lumbini garden, a small statue of Buddha, Tanjoubutsu (Buddha’s Birth), is placed in a shallow metal bowl. The statue represents the infant Buddha, who according to oral tradition, immediately after birth, stood up, seven steps forward while pointing his right hand to the heavens and left hand to earth, said: “I alone am honored in heaven and on earth” (Tenjou tenga yuiga dokuson – 天上天下唯我独尊).

In the Kamiyoshida district of Chichibu, Saitama, children sprinkle flower petals along a mountain trail as part of the Tsukagoshi no Hana Matsuri (flower festival of Tsukagoshi) on May 4, an event mainly organized by schoolchildren. Before the festival, the children decorate the hanamido float and upper grader boys will stay overnight at the Kumano jinja to guard the float and Buddha statue. After hearing the sound of fireworks at 7 am, the children gather at Kumano Jinja shrine in the center of town and start walking. Carrying a hanamido float and a Buddha statue they march up the Yoneyama Yakushido temple on a mountain side about 300 m away. During the procession, the children scatter the petals of cherry and peach blossoms, camellia and dame’s violet to brighten the mountain path. After arriving at the temple, the children enshrine the statue in the hanamido and place it outside the temple, pouring sweet tea over it and joining their hands in prayer. 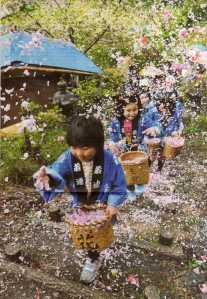 Primary school students begin the 30-minute ascent to Yoneyama Yakushido temple. Flower petals to purify the temple path were collected by children in the two weeks prior to the festival and were stored in a refrigerator for the celebration PHOTO: Daily Yomiuri

happening to be born
on Buddha’s birthday
a baby deer!

According to another oral tradition however, Gautama Siddhartha, the future Buddha, appeared to his mother before he was born in a vision in the form of a white elephant. A white elephant float is an integral part of the day’s(Apr 5th) procession at Nippon-ji Temple in Tako Town, Chiba Prefecture, Japan. The temple is ancient and very famous temple of the Nichiren School of Mahayana Buddhism.

One foot in front of the other: Buddha’s Birthday (Hana Matsuri)

Flowery feast for Buddha’s birthday (Scenes from the Archipelago), The Daily Yomiuri May 19, 2012 …article on how the Kids’ flower festival in Saitama is celebrated.