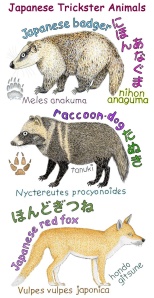 One of the greatest pleasures of a countryside naturalist is talking with farm people. I often stop my bike to chat with farmers and farmwives working in the fields. I especially like to ask about local plants and animals. As might be expected of people who spend much of their time outdoors, farm folk are often keen wildlife observers.

An ideal situation occurs when several people are present, and they get to reminiscing and swapping stories. Then all I have to do is just sit back and listen. When the topic is animals, the stories have a way of working their way around to a masked-face creature which the farmers know as the mujina.

In some stories the mujina is endowed with mystic qualities, able to appear out of nowhere, and to disappear in a flash. At first I thought the farmers might be talking about some sort of legendary creature, like the tengu or kappa. But they assured me time and again that this animal is real, and their descriptions of it were both detailed and consistent.

I also thought for a while that perhaps the farmers might be describing a tanuki or raccoon dog. “The mujina does looks a little bit like a tanuki,” they insisted, “but has shorter legs and a more powerful, heavy-set body. The nose is longer than a tanuki’s, and the eyes are smaller. Also, the mujina has exceptionally long claws, and the paw-print always shows five toes.” The tanuki, being a member in good standing of the dog family, only shows four.

From these precise descriptions I soon realized that the farmers could only be talking about the Japanese badger. The correct name for this medium-size Mustelid Family mammal is ana-guma or ‘hole-bear,’ but in many country districts it is known as mujina. The Japanese badger is an endemic species (Meles anakuma), found only on the islands of Honshu, Shikoku and Kyushu. Two closely related species, the Asian badger (M. leucurus) and the European badger (M. meles) inhabit the continent. The American badger (Taxidea taxus) is a distantly related cousin.

Japanese badgers are omnivores with a special fondness for earthworms. Their keen noses are adapted for sniffing out underground food; and their long sharp claws are perfect for digging it up; and also for excavating the dens, or setts, where the badgers spend the coldest months in a torpor-like state of hibernation. A variety of fruits and insects supplement the badger diet, and in late autumn fallen persimmons provide a short but abundant feast.

In more than 25 years living in the countryside of northern Chiba Prefecture I have never seen a single badger. Nor have I been able to spot their tracks. Despite being extremely conscientious about checking road-kills, I have never come across a badger carcass. But badgers are almost exclusively nocturnal, spending the daytime hours hidden away in their setts. In addition, unlike their European relatives, which often live in large colonies, the Japanese badgers tend to lead solitary lives, and are usually present at very low densities.

Actually, for over 20 years I had never seen any signs of a red fox in this area either, and naturally assumed they had disappeared completely. Then one night a local environmental protection group set up a motion-triggered camera in a field just a short walk from a railroad station. To everyone’s great surprise, by the next morning the camera had captured a clear image of a fox walking by.

Badgers are not listed in the Environment Ministry’s Red Data Book of threatened and endangered species. They are, however, listed in some prefectures. In Chiba Prefecture they are placed in the C category, meaning that they are not quite yet endangered, but their numbers and range do appear to be shrinking. In some regions badgers are still hunted for their meat, said to be tastier than the tanuki’s. Badgers are smoked out of their setts, or pulled out by fierce, highly-trained hunting dogs.

The badger, along with the red fox and the tanuki raccoon dog, ranks among Japan’s premier trickster animals. These critters play prominent roles in local folklore, especially as talented shape-shifters able to assume any form they like. Their specialties, of course, are beautiful women. Many a Japanese man has spent long years in married bliss only to eventually discover that his beloved wife is really a badger, fox or tanuki in disguise.

The first mention of a mujina in Japanese literature comes from the Nihonshoki, a compendium of Japanese early history and classic mythology completed in the year 720. According to the chronicles, a mujina appeared in the northern provinces in the 35th year of the reign of the Empress Suiko (627). This mujina not only impersonated a man, but was able to sing as well.

Short is a naturalist and cultural anthropology professor at Tokyo University of Information Sciences.

One thought on “Folk, legends of the shape-shifting mujina”