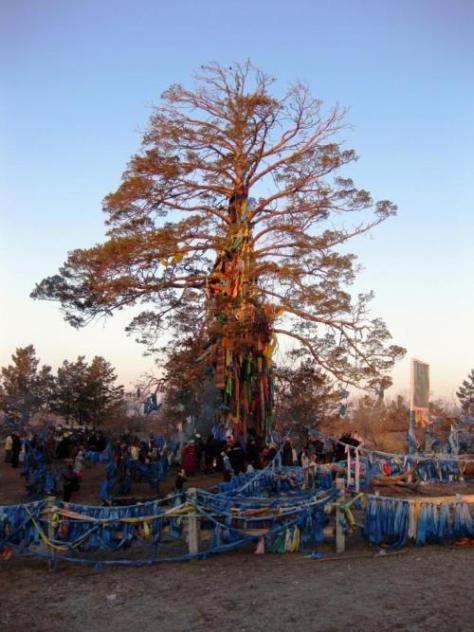 The following is an excerpted passage from Khazar Khaganate:

“Today there is a considerable number of Shamans in Mongolia, though Buddhism is the dominating religion here. The festival in Seleng Aimag is the grand festival of Shamanism in Mongolia. All the Shamans from across the country gather at the site of a big tree called “Eej Mod” which means “Mother Tree”. Its not an organized religion. There is not a particular set of practices known throughout the entire Shamanism world. They don’t have any religious holy place like Church or Mosque. Many anthropologists have declared it a set of the oldest religious practices in human civilizations and most of today’s organized religions have roots of some practices from Shamanism. Though there is not an exact period about the origin of Shamanism, but it has been the dominating religion of Turko-Mongol ethnic groups in Siberia and Central Asia for centuries. Today followers of Shamanism are found in largest number in Japan, Korea, China, Mongolia and Africa. Shamans are the messengers between the humans and spiritual world. Among Mongols, many families have a Shaman, who is responsible for the religious stuff like communication between spirits of the family members and other good and evil spirits.

When we reached the site, large number of people had already arrived there. I saw people praying around the “Mother Tree”. Pieces of cloth were tied to the tree, mostly blue. People were making rounds of the tree and throwing milk, vodka or some beans on the tree. There was a table near the tree decorated with Mongolian cake, milk, vodka and candles. People would keep some food items, like chocolate, there and pray. We followed all the practices to have a better understanding of the belief of people. There was another small table of candles near the tree. Everyone would go to the candles and take some “blessings” from the smoke of candles. So did I. There was a kind of hole in the tree, fit for a human head to go inside. People had lined to make special prayers with their heads in that hole. I also did it, but had no idea what to say or pray. Though i am a secular person but have respect for all beliefs. People were throwing Vodka and milk on that tree while making rounds. I took the bottle of Vodka and packet of milk from my friend and followed others. To understand best a belief, one has to be practically among the followers and closely see what and how they do. Families had come with children from far-flung areas to attend this festival. Some had even brought tents. A group of Shamans were beating the drum near by the tree and doing prayers, running rounds and making a strange noise. The grand prayer with all Shamans had to start later at 10am. We had much time till then and left for breakfast back to the hotel. Sukhbataar is a small city. We were lucky to find a small restaurant with Khushuur, Tsutai Tsai (milk tea) and soup in the morning, when most restaurants are closed in small cities. My Chinese friend, who had an argument about the flying capability of Shamans, again started a discussion during the breakfast. I said “when you go rounds and rounds, you feel dizzy. Shamans make rounds of the tree running, they drink Vodka during this practice. While extremely dizzy, it feels as if someone is flying”. Everyone laughed and this was funny to be reasonable for my friend. I told him that i made this joke to make him understand and keep quiet on how Shamans can fly? After the breakfast, we left back to “Mother Tree”, about 20 minutes drive north of Sukhbaatar city.

Now the grand prayers were to start soon. People were making a big circle around the tree. We sat in the first row. All Shamans, male and female, were gathering around the tree to start the prayers. Their was a senior Shaman reading the prayers and other Shamans and people, including us, would say “Khuree”, which means the word “Ameen” in Islam and Christianity. People were still throwing Vodka and milk on the tree. My back and cap were wet with milk and Vodka thrown from behind, coming like rain drops. After the prayers were finished, Shamans started running around the tree, beating the drums with a stick in their hand. I asked my Mongol friend what do they mean by doing this? He said they will now start communication with spirits and someone’s spirit “will come” in them! When these Shamans would fall down, their family members carrying them from shoulder would take up and give another drink of Vodka. I was amused by these all unique religious practices. While thinking later about all the practices i saw, i believed most of the very ancient practices of Christianity, Islam and other organized religions were taken from Shamanism. For instance, fear of nature was the causes of many ancient religious practices in almost all religions of the world. Shamanism is also mainly based on fear of nature and spiritual world. After several rounds of the tree, those Shamans would fall down making loud noise in strange language. It was when they would “go to the spiritual world and talk with spirits”. They believe good and bad spirits exist and that Shamans can heal disease with the help of spirits, most probably “good spirits”. There is a similar concept of good and bad “Jin” among Muslims. “Jin” is spirit or a supernatural creature, that some magicians try to control with verses of Quran and solve problems or cure disease by them…. ”

3 thoughts on “Notes: Eej Mod – The Mother Tree of the Mongolians”