Note: A twin fish motif is seen adorning a shrine of The fishing deity Ebisu in Miyako, that was also an emblem common to the royals of the ancient Korean state of Gaya and Ayodha in India

“When freely associating the deities of Japanese fishing people one commonly thinks of Ebisu, Konpira 金毘羅, Ryujin 龍神 and many more.12 However, their characters vary by region. Here, we will pick up probably the most prominent one of them, Ebisu, to explore deeper layers in the meaning and functions of Japanese fishing religiosity that lay beyond the popular image of this deity.
Ebisu is enshrined all over Japan as the deity of merchants and fishermen but also simply as a deity that brings fortune for anyone. Most manifestations or illustrations show this deity in the kind of Ebisu SaburØ 恵比寿三郎 (Illustration 1-a), i.e. as a voluminous laughing man with a fishing rod in one hand and a red fish in the other.13 Ebisu is often enshrined in pair with the Daikoku 大黒 as both are associated to the so called Shichifuku-jin 七福神 (seven deities of fortune). However, the Ebisu in most fishing villages differs significantly from this rather folksy iconography.

Ebisu is usually enshrined in the kamidana 神棚 (ShintØ house-altar) of virtually every household in a fishing community. Here, the deity can be represented as an illustration of the popular SaburØ type or by small rocks or stones (Illustration 1-b), and “invisible” or “discarnate” Ebisu are possible, too. The stone, for instance, is seen as shintai 神体 (lit. “deity’s body”; object, symbol or medium in which the spirit of a kami is believed to reside) of Ebisu. Aside from such “private” veneration in households, Ebisu is also worshipped by a community. Such Ebisu was for instance a small rock that had been taken from the seabed, caught by incident in a net or a bottle that had been washed ashore.14 This can be contrasted with a third type, the Ebisu aba. An aba 浮子 or apa (Illustration 1-c) is a wooden float that is tied to a fishing net, so that in this case it is more likely to be a Ødama 網霊 (spirit of the net; Sakurada 1980: 151). Replacement of such an “Ebisu-float” or “object-Ebisu” is possible when catches decline or when it has been stolen. Whales and sharks are also in many places regarded as Ebisu, because they often hunt schools of fishes or are surrounded by them (Yanagita and Kurata 1938: 165). An interesting aspect of belief in Japanese fishing villages is that drifting corpses found at sea “were regarded as deities – quite often manifestations of Ebisu – that brought luck to the fishermen if they were treated properly.” (Kalland 1995b: 45) Thus, they were carefully venerated as Ebisu and buried in the village’s graveyard. Drifting corpses attract fish (especially carnivorous species), but it is also known that artificial reefs (i.e. relatively huge rocks, concrete blocks or even scrapped ships etc.) do as well. The “outstanding expert on Japanese fishery-folklore” (Naumann 1974: 3) Sakurada Katsunori 桜田 勝徳 tells a related anecdote:
One day, a friend of mine visited a fishing village, where he was picked up for a ride on a boat for mackerel scoop-netting. By coincidence, the crew made a very nice catch that day. Hereafter, the nice catches prolonged for the next two or three times the boat went scoop-netting. The people in the village heard of this and considered my friend an Ebisu. ‘Please take a ride on my boat!’, he was asked again and again by many and so spent a quite busy time over there. (1980:154- 155; transl. by author)

We see that Ebisu is a deity with a complex character. First, Ebisu can be seen as a “visiting deity” (marebito 稀人, a “stranger as god”; Yoshida 1981). The second characteristic is that of a “reverential designation of that power who grants the fishermen successful catches.” (Naumann 1974: 4)15 Here we can speak of Ebisu as a yorigami 寄神 (lit. “attracting deity”) inhibiting the function of a yorishiro 依代 (a kind of “Himmelspfeiler,” where deities can descend to the real world) that attracts marine resources bringing wealth. This latter feature can also be read into the manifestation as a merchant’s deity of commerce. We could, of course, simply see this as a kind of sympathetic magic, a method to call for good catches…”

“Naumann compares the Ebisu worship with hunting ceremonies, an interpretation that is worth referring to at this point, because we will deal with related aspects later in this paper.
By isolating one basic component of the Ebisu belief, Naumann attempts her investigation through consulting ceremonies that can be characterized as “sending back” of (animal) spirits. One example is the erecting of memorial stones for killed animals such as those for bears inscribed yama no kami 山の神.16 Here, the yama no kami is conceptualized as guardian deity, i.e. as “owner and master of the hunting animals … who grants or refuses the game to the hunter … [and] appears in the shape of an animal” (Naumann 1974: 7). Hunters, as much as fishermen, often make ceremonies, in which the heart (or other entrails) that is thought to be the “seat of life” is offered to the “master and owner” of the killed animal. One example is ceremony of “first catch” (commonly called hatsuryØ 初漁), in which the “first fish” that is caught in the fishing season or within the cycle of New Year’s ceremonies17 “is first offered to Ebisu and then consummated [sic!] by a certain group of persons.” (Naumann 1974: 6) This, she argues, is a common motif of the hunting and fishing customs of North Eurasia and North America and “directed by the belief that the properly treated animal in its next existence gladly will place itself at the hunter’s disposal” (Naumann 1974: 9). There are, for instance, the several ceremonies of Ainu, such as the iomante, in which a bear (worshipped as deity) is “sent home” in hope of his return. Another example is the use of “head knocking sticks” (isapa-kik-ni; lit. “wood to knock his head”) by Ainu to kill the caught salmon. Salmons are believed to prefer being killed by the ceremonial isapa-kik-ni rather than by a stone or usual stick. In this way, “they would return later to be caught and killed again.” (Naumann 1974: 11) By interpreting this conception of a “spirit of a species” to several aspects of Ebisu as “stranger deity” Naumann comes to begin concluding her investigation:
… stories … tell of the visit of an unknown man who admonishes his host to drop fishing by poisoning the pond or stream as the host was preparing the following day, or he asks the host to spare a certain big fish when fishing in a certain place. When acting against this advice it is found that the biggest fish caught is nobody else but the visitor of the day before, his belly still full of the food given to him on that occasion. And in some instances … the rash deed was followed by a curse of the killed fish. (Naumann 1974:13)
Also whales and sharks will chase schools of fish to the fishermen’s fishing grounds if treated with proper ceremonial respect, however, if not following these ceremonies they would become angry and chase away fish or do other harm. Therefore, “these are the very facts held to be responsible why whale or shark are called Ebisu or identified with Ebisu.” (Naumann 1974: 14) Hence, Naumann concludes that these conceptions and customs … lead us far back as … into prehistoric and protohistoric periods … . Therefore we are permitted to unconditionally interpret Ebisu as a functionary deity of fishing who has been associated with conceptions sprung from the mentality of genuine hunters and fishermen. [The] animals themselves – individual beings provided with souls as well as collectives of the species under the protection of the species-spirit – were the oldest object of worship of the hunter and the fisherman.” (Naumann 1974:14-15)
Although the mentioned types of Ebisu worship do not directly affect people’s ecological behavior by means of resource management, we can say, that Ebisu as a archetypical metaphor expresses a specific attitude of fishing people toward nature as a religious conceptualization. Using the terminology of resource management one could say that withdrawing fish from a resource pool is metaphorically compensated (and commemorated) by the ceremony of “sending home” the spirit of a resource, which, through this, is believed to come back for the benefit of the resource user (fisherman)…”

Read more about Ebisu at:

Wikipedia entry on Ebisu … it is often noted as in this article that Ebisu is a local and indigenous deity, however, the above paper by Wilheim shows Ebisu as a visiting yorigami deity that has to be attracted back to his shintai. 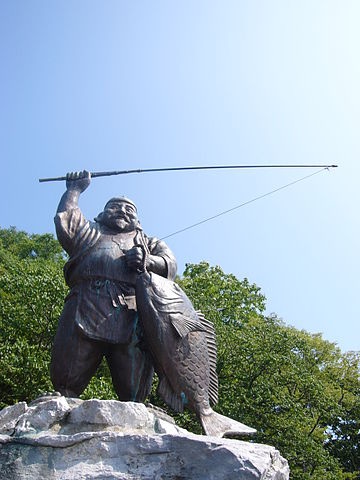 One thought on “Ebisu, the visiting deity of fishing and good fortune”