The above white dou pottery (hollow container) from the Shang Dynasty, is decorated with an exquisite patterns of the yunwen and leiwen cloud-and-thunder combination, an elegant still commonly used in Chinese designs today.

This cloud-thunder pattern is ubiquitous not only in classical Chinese architecture and clothing, but in East Asian Chinese-influenced cultural spheres, like Japan and Vietnam.

Clouds are considered, especially in Daoism, to be lucky and feature heavily in Chinese architectural ornamental details, paintings and symbolism.  It also sounds close to 运 yùn and so is a homonym for ‘luck, fortune, fate’. For farmers, the symbols were harbingers of rain/thunder, and so clouds were obviously happy signs on the horizon for the imminent rains needed for watering their crops. Clouds are Daoist  yin and yang symbols because they are a fusion of the elements of water and air, sky and earth.

Consequently, dragons, the masters of water and rain, are often depicted gamboling in the clouds as dragons are the masters of water and rain. A picture of bats flying among clouds is a wish for good fortune. The simplified motif form for a cloud resembles the shape of the 灵芝 líng zhī fungus (elixir of immortality). Clouds of five colors represent the five blessings of life. 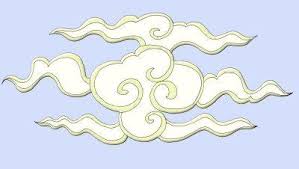 Called the ruyi, the word ruyi itself comes from the two characters rú (如) and yì (意), and together they literally mean “as one wishes.” However, that is only the surface meaning; the inner meaning has been enriched over thousands of years of Chinese history.

At the beginning of Chinese civilization almost 5,000 years ago, the Yellow Emperor (the earliest known Chinese monarch), who after winning an epic battle, named his weapon “Ruyi,” implying that, literally “as wished” (rúyì), he was victorious in protecting the nation and establishing a culture that would last up to the present.

By the Tang Dynasty, the ruyi had become a symbol of power, peace, and happiness, and could be spotted in paintings and on sculptures. The Monkey King, a mythical Buddhist monk from classical literature, is known for carrying a magical staff called Ruyi Golden Hoop Staff.

Even today the word “ruyi” is found in many Chinese greetings, especially those used during the Chinese New Year, including “wànshì rúyì” (万事如意), “jíxiáng rúyì” (吉祥如意)，”xìngfú rúyì” (幸福如意)—which translate to something like “all the best” “good luck” and “best wishes.”

The motif spread across East Asia, as popular Buddhist pattern woven on luxury Tibetan rugs and embroidered on Chinese clothing. Even today, the cloud-thunder meander pattern remains a common pattern in Chinese pottery design while the cloud pattern is also a popular motif in Japan in many diversified many forms on kimonos and clothing fabrics.

Earliest origins of the motif

As mentioned earlier, the earliest Chinese motifs are known from Shang potteries or bronzes. What is tantalizing to consider, is that the cloud motif may have been a motif that had disseminated from the earliest prehistoric progenitors of East Eurasian-Northeast Siberian populations who then spread out across East Asia.

The Ainu have as one of their creation myths, a descent from heaven a deity upon a five-colored cloud:

“ … the world was created when oil floating in the ocean rose like a flame and became the sky. What was left turned into land. Vapor gathered over the land and a god was created. From the vapor of the sky, another god was created who descended on five-colored clouds. Out of those clouds, the two gods created the sea, soil, minerals, plants, and animals. The two gods married and produced many gods including two shining gods—the Sun god and the Moon god, who rose to Heaven in order to illuminate the fog-covered dark places of the world.”

When you consider that the Ainu descend from a people who are genetically a “deep branch of East Asian diversity that is more basal than all present-day East-Asian farmers” (Jeong 2016) i.e., one of the earliest people at the  root of the East Asian genetic tree and have been relatively isolated on the Japanese archipelago, the cloud motif is possibly a motif that is more likely to have been disseminated from an early progenitor than to have been a borrowing from the Chinese in historic times. Also according to a Jeong 2016 paper, there was early gene-flow from the Ainu into the northeast Siberian populations, including the Ulchi and Nivkh, from whom the motif have spread to the earliest northeastern Chinese populations.

“Ainu-related ancestry is present in the Japanese and the Ulchi people from the lower basin of the Amur River (17.8 and 13.5% mean ancestry in Figure 2, respectively), as well as in two Nivkh individuals, an indigenous population from the Sakhalin island, in a similar analysis with additional samples (27.2% mean ancestry; Figure S5). This suggests a potential gene flow from an Ainu-related gene pool into these surrounding populations...”

Dissertation by Jeong 2016, THE GENETIC HISTORY AND ADAPTATIONS OF
HIGH ALTITUDE EAST ASIANS IN THE TIBETAN PLATEAU
https://knowledge.uchicago.edu/record /579/files/ Jeong_uchicago_0330D_13448.pdf