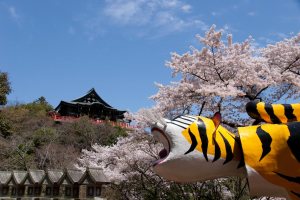 Mt. Shigi is said to be the first place in Japan where Bishamonten appeared. Legend has it that when Prince Shotoku Taishi prayed for victory over Mononobe no Moriya, – an opponent of the Buddhism that the prince was promoting – Bishamonten appeared on Mt. Shigi at the hour of the tiger, on the day of the tiger, in the year of the tiger, and led the prince to victory. To express his deep gratitude, the prince built a temple dedicated to Bishamonten in 594 and named the temple Shigi-san which can be translated as “the mountain to be trusted and respected”. This anecdote is believed to be a reason why paper-tigers are placed around the temple. Affectionately known as “Shigi no Bishamon-san”, the temple is especially crowded with visitors during their first visit of the year (New Year’s Day).  As the temple enshrines Bishamonten, the original god of war and warriors, and also has a tiger as a guardian god, Chougosonshi-ji Temple is also famous for attracting professional baseball players from the Hanshin Tigers who go there to pray for victory.

Painting of Tamonten, the Guardian of the North (one of the Four Guardian Kings). 13th century (Image: Wikipedia)

The “Bishamonten” are dedicated to the God of war. There are three famous Bishamonten in Japan. Saishouji Temple, in Oiwa, holds one of them, the Oiwa Bishamonten. The other two are located on Kurama mountain in Kyoto Prefecture as well as the abovementioned Shigi Mountain in Nara Prefecture. The main hall was rebuilt in 1762(Houreki 12nen) and in 1993 it was widely repaired. The principal image is 1.8inches tall and is made of pure gold. It is said to have been made by Shotoku Taishi(the regent of Emperor Suiko in the Nara period). Here many votive pictures of horses are dedicated.

More historical background is given in The Seven Propitious Gods: Bishamonten – Wealth or War – Which is it?:

“Mimi Hall Yiengpruksawan in a 1998 publication of the Japanese Journal of Religious Studies said that Bishamon has his origins primarily in Central Asia and not India. He emerged in the sixth and seventh centuries as a militant protector of Buddhism and Buddhist rulers.” She added that “There were also legendary accounts of the barbarian-quelling powers of Bishamonten.” These became popular in both China and Japan. “Later a Japanese emperor, Kanmu 桓武, would install a monumental sculpture of Bishamonten in the upper story of Rajōmon 羅城門, the main gate to his new imperial capital, Heiankyō (the predecessor of Kyoto), which he had ordered built and occupied as the Emishi wars came to a close… [¶] This is an iconography that helps explain… why shrine-temple complexes and military outposts bear so many similarities, why pagodas, to name but one example, are reminiscent watch towers.”

Bishamon is the patron saint of (among others) priests, soldiers, doctors and missionaries – All of this makes sense. This god defends the faith, i.e, Buddhism, he is militant, at least, in costume, he wards off evil – which includes things that could harm one’s health …

Henri Joly, who didn’t always get things exactly right, cited Ernest Eitel about Bishamon in saying that “…he was canonized as God of Riches by Hiuen Tsung in 753, and plays an important part in exorcism….

Getty notes that “In Japan [Vaiśravaṇa] is worshipped under the name Bishamon, and is represented in armour ornamented with the seven precious jewels, and is generally standing on one or two demons. In his left hand he holds either a small shrine or the flaming pearl, while in his right is a jewelled lance.” The shrine is said to represent the Iron Tower in India where the Buddhist scriptures were found. Bishamon is often shown looking at the shrine as a symbol of him overseeing the treasures of that religion.

In 1902 Clarence Brownell referred to Bishamon as “the lucky god of War.”

In a 1906 volume of Kokka there is a one page entry entitled “Portrait of Bishamon-ten (The Indian Mars)”.  Joly in 1906 identified Bishamon as one of thesan-sen-jin (三戦神) or war gods. This figure he says is represented by a head with three faces riding on a boar.

August Karl Reischauer, Edwin O’s father, said he is in his Studies in Japanese Buddhism originally published in 1917. That same year Basil Stewart concurred, but added that Bishamon was also the god of glory.

On the other hand, L. Beatrice Thompson wrote in 1906 that “…in spite of Bishamon’s armour and ferocious aspect, he is not more especially the god of war than is Daikoku, and quite as much the god of riches as he…”

Bishamon as the god of wealth – A number of ancient Japanese texts say that Vaiśravaṇa is the same as Kuvera (sometimes Kubera) the ancient Hindu guardian of wealth. According to Chaudhuri “These writings projected the image of Vaiśravaṇa as a god of wealth to the common Japanese, in addition to that of a protector of the country. Thus he became a god of fortune.

The article Bishamonten draws our attention to the earliest introduction of Bishamonten in Japan as one of the four compass or directional deities:

“This armor-clad, weapon-wielding, demon-stomping deity was introduced to Japan in the 6th century AD as one of the four Shitennō (Four Heavenly Kings Protecting the Four Directions), wherein he is known as Tamonten 多聞天, the guardian of the north and protector of the holy places where Buddha expounds the teachings. The Four Kings soon rose to great prominence in rites to safeguard the Japanese nation. In later centuries, however, Tamonten became the object of an independent cult, supplanting the other three in importance. When worshipped independently, he is called Bishamonten (or Bishamon, Bishamon Tennō, Tobatsu Bishamon), but when portrayed among the Shitennō he is called Tamonten.”

Despite Bishamonten’s associations with warriors and war, the article Bishamonten appears to make a distinction saying that “Bishamon is the god of warriors (but not of war) and prayed to for victory prior to battle. He is also a god of defense against foreign invaders, a deity of healing with the power to save emperors from life-threatening illness and to expel demons of plague…, to keep personal enemies at bay, and to reward followers with riches, good fortune, and even children.  Around the 15th century, he was enlisted as one of Japan’s Seven Lucky Gods owing to his association with treasure and wealth. He is identified with various other deities, including the Hindu god of wealth Kubera / Kuvera; the Buddhist deity Tobatsu Bishamon (protector of capital cities and dispeller of foreign invaders); the Great Black Warrior of Vedic lore Mahākāla (aka Daikokuten, another member of Japan’s Seven Lucky Gods); the goddess of wealth and beauty Kichijōten (his wife in Japanese Buddhist lore); and with various syncretic deities including Sanmen Daikokuten, Tenkawa Benzaiten, Shōgun Jizō, and Sōshin Bishamonten.” 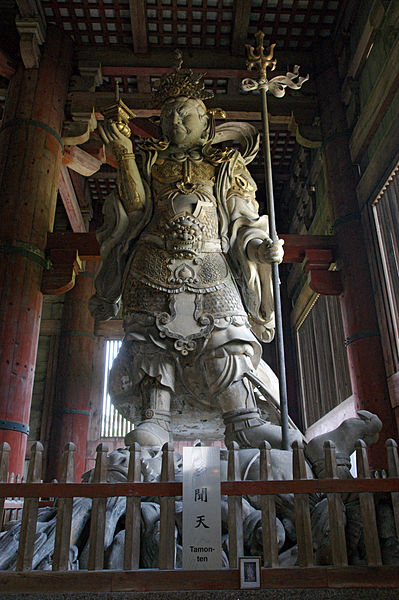 In particular, the article Bishamonten highlights the deity’s role as expeller of plagues:

“The Shigisan Engi Emaki 信貴山縁起絵巻 (Illustrated Handscroll of the Legends of Mt. Shigi), was painted in the 12th century as a tribute to Bishamon’s miraculous power to ward off illness and expel the demons of plague. It includes the story of how Bishamon cured Emperor Daigo 醍醐天皇 (885-930) by dispatching Kumāra 倶摩羅 (Bishamon’s youthful dōji 童子 attendant) to help the sick emperor.Bishamon appears in other painted scrolls of the same period. Says the Tokyo National Museum (about adjacent image): “Here, Bishamonten is portrayed as a benevolent deity who protects devotees of the Lotus Sutra. Examples of Bishamon holding a bow, as he is painted here, are found in Chinese works of the Tang (618-907) and Song (960-1279) dynasties. This scroll, called the Extermination of Evil (Hekija-e) or Exorcists Scroll, is conjectured to have been made during the time of Emperor Goshirakawa (1127-92, r. 1155-58) in the latter part of the Heian period (794-1185) and kept in the treasure house of Rengeo-in Temple (Sanjusangendo). All the deities shown here [in the five scolls] are considered, in China, to be benevolent deities who expel the demons of plague. This set was originally mounted as a handscroll that was known as the ‘second edition of the Masuda family Hell Scroll.’ After the war, the hand scroll was cut into five sections and the paintings mounted as hanging scrolls. The acts of each of the gods in exterminating evil are briefly explained in the texts accompanying the illustrations. <end text from Tokyo National Museum“

The Indian equivalent of Bishamonten or Tamonten is Vaiśravaṇa –  the Indian guardian of the northern direction, and his home is in the northern quadrant of the topmost tier of the lower half of Mount Sumeru. He is the leader of all the yakṣas who dwell on the Sumeru’s slopes. In the Pāli scriptures of the Theravāda Buddhist tradition, Vaiśravaṇa is called Vessavaṇa. Vessavaṇa is one of the four Great Kings, each of whom rules over a specific direction. Vessavaṇa‘s realm is the northern quadrant of the world, including the land of Uttarakuru. According to some suttas, he takes his name from a region there called Visāṇa;  Vessavaṇa has the authority to grant the yakkhas particular areas (e.g., a lake) to protect, and these are usually assigned at the beginning of aVessavaṇa‘s reign. When the Buddha was born, Vessavaṇa became his follower, and  often brought the Buddha and his followers messages from the gods and other humans, and protected them (Source: Wikipedia entry on Vaisravana. )  It maybe a somewhat futile or frustrating task to sort out whether the origins of Bishamon are Chinese or Indian as Buddhism originated in India and Buddhist figures and concepts filtered to Japan, not only via China (after having evolved or having been transformed there) but also directly by Indian monks to Japan or interacting with Japanese monks.

In Japanese iconography, Bishamon is portrayed holding a spear in one hand and a small pagoda in the other hand, the latter symbolizing the divine treasure house, whose contents he both guards and gives away. For images of Bishamonten in Japan, see the BISHAMON, BISHAMONTEN article.

The Seven Propitious Gods: Bishamonten – Wealth or War – Which is it? Vegder’s Blog