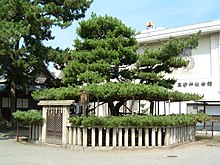 Thus we can surmise that the happy married couple folklore existed by late 10th c. (the inclusion of the twin pines tradition could have been a nod to indigenous earlier folk or village guardian deities), and was regarded as important enough to be included alongside of the three main gods venerated by the shrine.

This legend is the likely the source of the jo-to-uba stones (see photos of jo-to-uba couple stones of Gunma prefecture and Izu peninsula at the Dosojin page, Onmark Productions website), or possibly a conflation of legends behind the dosojin stones seen all over the countryside of Japan.

Besides the Jo and Uba couple who are more like an ancestral guardian deity than a primordial pair-cosmic couple, other local legendary sources of a cosmic primordial couple exist in Japan as well, see Ainu legend of the demiurge, cosmic creation and first human couple; The most secret Primordial Pair: Kamuro-gi and Kamuro-mi; and Izanami and Izanagi.

It is nevertheless also possible and likely that the happy couple legend or stone tradition arrived from ancient continental sources, since they tend to be placed as crossroad or byroad markers suggesting their protective value to travelers. On the continent, couple or primordial pair myths too existed, eg. the Nuwa legend of the brother-and-sister primordial pair; the Miao cosmic couple; The embracing Sky Father and Mother Earth and the Heavenly Ropevine. The Do-to-Uba and Dosojin couple are more reminiscent of the other not-so-much Primordial or Cosmic Couple, as a genealogical or ancestral lineage couple, such as the Ashinazuchi ancestral couple. In many of the Mongol, and ruling Ashina clan genealogies, a key ancestral couple is featured either in passing or central to some genealogical tale (see “Cultural heroes and agricultural gods in elderly garb“). Twin tree legends or sacred tree spirits or pair deities with significance for marriage and couple fertility are even more common around the world, see The Marriage (“Lianli” or Entwined) Tree of the Forbidden City (China), Frazer’s The Golden Bough or Goddard’s The Golden Bough, p. 163 and

One thought on “The Legend of the Twin Pines, and Jo and Uba – the Happy Married Couple (尉と媼 Jō-to-Uba)”